Sharing my little update email I send out to friends so you know what I’ve been working on:

Los Rakas crushed NYC last week during LAMC, winning the Discovery Prize award from LAMC/Jack Daniel’s and some cool stuff from SHURE, Gibson and more!  When the guys weren’t doing press or playing shows {they played Que Bajo @ Santos Party House, LAMC @ Bowery Ballroom w/ a full band, Piano’s w/ Anita Tijoux and headlined a late-night HOT party at SOB’s w/ Zuzuka Poderosa & Uproot Andy), they had time to record new music in the Bronx studio, The Zoo AND shoot a video in 4 boro’s for their song “Kalle” w/ young director, Craig Nisperos. PEEP THE TEASER: http://vimeo.com/13242051.  Check out what the NYTimes had to say about the group:

“Though Latin alternative music has plenty of party songs, they usually arrived alongside more serious messages, set to dancehall reggae and funk by Los Rakas, a group from Panama relocated to Oakland, Calif.; both performed at the Bowery Ballroom on Thursday night.”

Blitz the Ambassador rocked Celebrate Brooklyn this past Sunday with The Roots & Talib Kweli for the OkayAfrica World Cup Celebration.  It was packed w/ 12,000+ beautiful people on a hot & humid Brooklyn summer day!  MTV World was in the house to interview Blitz {will share soon}, but check out what the Huffington Post had to say: “The djembé-playing artist rocked the stage. And while his set was short,he lived up to his name as an ambassador, introducing the audience to his intoxicating, world-wise hop-hop.” | Don’t miss Blitz opening for Public Enemy at NYC’s Summerstage on August 15th!

Blitz rocks the at-capacity crowd at Celebrate Brooklyn on 7/11/10.

Bomba Estereo just got back from China where they played the Shanghai Expo 2010 and are now in London playing w/ Ceu tonight + this Sunday at the Shoreditch Festival.  After their amazing trip last month to Bonnaroo, the group arrives this Wednesday to play their SUMMER USA tour where they hit Philly, NYC, SF, LA, Chicago, DC, Boston, and even Raleigh, North Carolina.  All dates & details here.  The band was also selected to participate in a special Fania Records remix project with the FADER – more info coming.

I’m also doing some work with the very important campaign led by Rage Against the Machine‘s Zach de la Rocha, The Sound Strike, an effort to mobilize artists (300+ have signed on already to boycott playing Arizona) around what’s going on in with SB 1070.

…and finally, the very talented MIMA will be coming to the USA next week from Puerto Rico to play 2 shows w/ Macha y Los Okapi.  July 25th at Public Assembly and July 27th opening up for Bomba Estereo at SOB’s.  Check the info below.  If you don’t know, get to know… 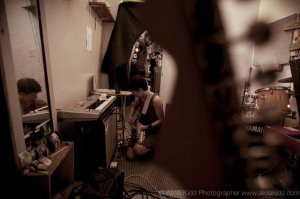