2011 – what a Raka year.  Feel like a ton of bricks hitting me, but we forge on!  Los Rakas is one of the hardest working groups out there, blazing trails and constantly breaking down barriers.  They transcend genre and style while showcasing their talent and creativity everywhere they go.  I am so proud to be working with these guys and have no doubt 2012 will be theirs.

A lot of people said a lot of things, but these are some of my favorites:::::

“They’re celebratory without being goofy, topical and tropical, riding the kind of ping-pong chemistry that only a well-matched duo can achieve.” – David Dacks for Exclaim!

Every few years or so an act comes along that reminds us that reggaeton isn’t just a bunch of monotonous, pre-fab, bootyshaking basura for kids who are too young to appreciate salsa. Like Tego Calderon or Calle 13, Bay Area-duo Los Rakas blow up reggaeton’s lame conventions with smart, funny and wickedly inventive beats and rhymes. Panamanian-American partners Raka Dun and Raka Rich take the music back to its origins – back to the original, ’80s Panamanian/Jamaican reggae-en-español connection – while updating the mix for the 21st century. The result is a completely re-imagined version of reggaeton: smarter, funnier and with better beats. We dare you not to dance to this one. – Tom Pryor of Nat Geo

“Los Rakas put a serious dose of Baltimore in their Oakland for this one–and considering their Oakland was already pretty full of Black Panama, it’s amazing they found room for so much bass culture on one track.” – Eddie Stats for Large Up

“The front single off Chancletas y Camisetas Bordada is a tour-de-force number that’s so high caliber, you better believe the duo when they claim to be “dangerous.” Its fragmented depths and hinting disco strings work perfectly under the Panabay slang, one in which the Oakland cruisers once again plays ode to its beloved Mexican fanbase.” – Carlos Reyes for Club Fonograma (Read the full album review)

“Crammed into this eight-song EP, you’ll hear the flickering drum breaks of Baltimore club music, the syrupy pulse of reggaeton, the wheezing synthesizers of West Coast hip-hop, the buoyant riddims of Caribbean dancehall and the sound of a mattress squeaking in 4/4 time — a blush-able sound that knows no borders.”- Chris Richards for The Washington Post

“Self-released and wonderfully self-assured, we’re in front of one of the year’s most eventful and accomplished urban albums.” –CLUB FONOGRAMA

“Oakland-based Raka Dun and Raka Rich represent some of the best in Spanish-language rap coming out of the US, with a classic flow married to beats that draw from dancehall, future bass and good ol’- fashioned boom-bap.” –AOL SPINNER

“In a sea of rappers reciting endless lists of brand names, sexual positions and expensive traveling destinations, it’s beautiful to remember what true love for music feels like.” –NPR
VIDEOS
Ta Lista – http://www.youtube.com/watch?feature=player_embedded&v=rglS-aTRnYE
“If most music videos strive for maximum eye-candy then this joint is like a eye-pinata.” – LARGEUP

Cueria – http://www.youtube.com/watch?v=bdqv2TT0A1w
“The group recently debuted a short to go with the song “Cueria” which evokes some possible parallels to the shooting of Oscar Grant by BART police officer Johannes Mehserle in Oakland in 2009 and could be speaking to the excessive use of force by police in general.” – FRANK 151

Celebrating their 5th Anniversary as a group last month to a sold-out 500 capacity theater, The New Parish, in Oakland, Raka Rich & Raka Dun are prepping their upcoming solo projects and next Los Rakas release for 2012 while continuing to collaborate on hot songs and tour to growing audiences; the Raka movement is bubbling worldwide.

my fav shot by phil emerson 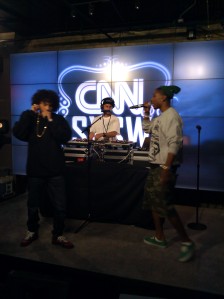 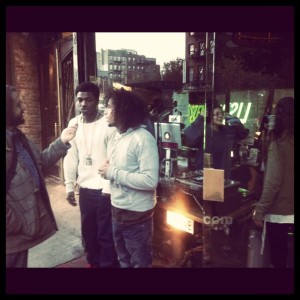 With Maria Hinojosa at NPR

Raka Dun gets his literature on on the NYC Subway 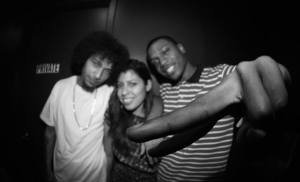