Looking forward to this book from Isobel Coleman (Read her recent essay, ‘The Better Half’) – Paradise Beneath Her Feet: How Women are Transforming the Middle East.  Comes out in April, 2010. 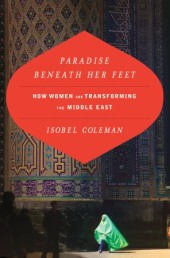 “Dr. Coleman is currently working on her latest book, which examines the role of women in bringing reform to the Muslim world. Paradise Beneath Her Feet: Women and Reform in the Middle East (Random House) looks at women across five countries — Saudi Arabia, Iraq, Iran, Pakistan, and Afghanistan. This strategic crescent contains more than 300 million people, nearly fifty percent of the world’s known oil reserves, two active wars, an unstable nuclear power and an aspiring one, and the heart of both Sunni and Shia Islam. It is in this volatile corner of the globe that the world’s future stability is likely to rest. The role of women is central to determining whether these deeply religious, conservative societies can make the transition to functioning democracies with modern economies, or whether they will remain in the grip of religious extremists. Dr. Coleman focuses on those men and women working within an Islamic framework to promote social change.”