Los Rakas appeared in SPIN MAGAZINE last week online. Did you read the interview?  I thought it was really on point and also a great breakthrough for the guys in the American hip-hop press which, take it from me, has been a hard nut to crack.  “But it’s in Spanish?” “But my editors don’t understand the language?” But but but but.  Big up to Brandon Soderberg AKA No Trivia for digging the sounds and digging deeper. 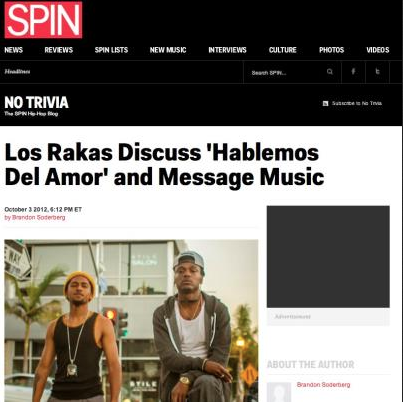 An interview with Raka Dun and Raka Rich
“And I don’t fuck with suckers, I’m from the Bay and I fuck with real motherfuckers like Los Rakas.” That’s E-40 on Panamanian Bay Area hip-hop duo Los Rakas‘ “Pimpin’ Smokin’ Dro.” The hump of non-English-speaking hip-hop can sometimes be hard to climb over for English-speaking only dummies like myself, so an E-40 shout-out like that helps. Then again, so does a song as evocative and immediate as “Hablemos Del Amor”.  Hear it here:

“Hablemos Del Amor” begins with atmospheric police sirens while rainy synths and a touch of melancholy Auto-Tune add some melodrama. The raps builds to a “one love” chant on the hook, invoking Bob Marley and Nas. In its final moments, the song simmers back down to pay tribute to Oscar Grant, Trayvon Martin, and as the group explains below, Panamanian reggae artist El Kid, killed at age 23. The end-of-song R.I.P.s brings to mind ST 2 Lettaz’s rap on “We Are the People,” off his recent R.E.B.E.L. mixtape: “Everybody talking about Trayvon, guess we forgot about Sean Bell…” ST bemoans the hashtag protest culture that sweeps up Twitter and leads to lots of Facebook likes and digital signatures but tends to turn murdered people of color into brief buzzwords. Los Rakas seem to be acting on the same frustrated impulse as ST, locating the latest injustice inside of a larger continuum of violence, and not an isolated incident that will soon be ignored for another isolated incident. I reached out via email to Raka Dun and Raka Rich of Los Rakas, while they were on tour, and they collective answered a few questions, giving some context for “Hablemos Del Amor,” and their global approach to hip-hop.

Then TEAM RAKA hop on a plane and head to Mexico City for Corona Capital Festival.  The line-up is crazy for a 2-day festival; OCESA the promoters, have outdone themselves.  To give you an example, Los Rakas play the Bizco Club Stage on Sunday, October 14 at 2:50 PM.  The stage that day also includes Josef Bamba, Memory Man, Rebolledo, Shabazz Palaces, ARAABMUSIK, Who Made Who, Neon Indian, James Murphy of LCD Soundsystem, Modeselektor, A-Trak, DJ Shadow.  WILD!  The full festival line-up is heavy and TEAM RAKA will be out in full effect! 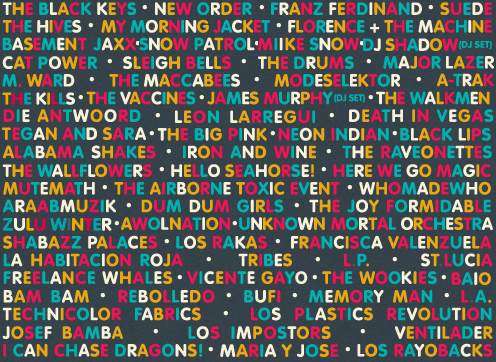 Then the guys tour the United States with Collie Buddz on his ‘Dark N’ Stormy’ tour this fall – full dates here.