“I have to confess that when we started our Food Security Initiative, I did not know that most food was grown by women. I remember once driving through Africa with a group of distinguished experts. And I saw women working in the fields and I saw women working in the markets and I saw women with wood on their heads and water on their heads and children on their backs. And I remarked that women just seem to be working all the time. And one of the economists said, “But it doesn’t count.” I said, “How can you say that?” He said, “Well, it’s not part of the formal economy.” I said, “Well, if every woman who did all that work stopped tomorrow, the formal economy would collapse.” (Applause.)” – Hillary Clinton

Click the link to see Clinton’s remarks at the UN Commission on the Status of Women this past week.  Read this article about Clinton pushing to move women’s issues from a “soft” issue to a “security” issue in the White House.

“Indeed, I think a pretty good argument can be made that the reason the Islamic world is disproportionately turbulent and has “bloody fringes,” as Samuel Huntington put it, doesn’t have to do with the Koran or religion in any direct way. Rather, it has to do with the fact that women are more likely to be marginalized in such countries.” – Nic Kristoff 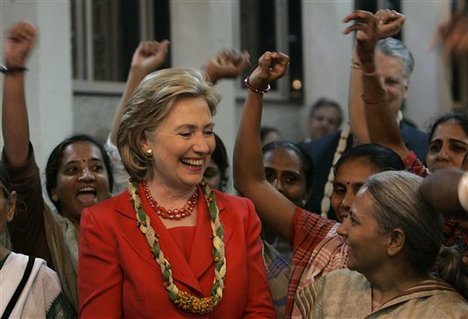