New video from Los Rakas – really proud of the roll-out on this one and end product.  It was a pleasure working with Craig Nisperos and his directing team on this. No es broma!

Don’t miss Raka Rich & Raka Dun on .  Due to travel restrictions for La Mala, Los Rakas will perform a FREE show on 2/17 at SOB’s with Flama & Nyle vs. The Naysayers. They’ll also do some special events that week so stay in the loop with them on twitter.

“While Los Rakas was in town last July for the LAMC {Latin Alternative Music Conference} and rocking multiple shows on every single day of their week stay, instead of take a day off to chill, the guys hit THE STREET on a Sunday morning in 4 NYC boros to shoot the clip for ‘Kalle.’  Directed by NYC-er, Craig Nisperos, the video is an ode to the classic NYC hip-hop video, which the guys really wanted while they were in the city.  The clip drops in time for their return to NYC; on February 15th, Los Rakas plays with Spain’s La Mala Rodriguez at SOB’s. Get Tickets. Get a FREE download of ‘Kalle’ from RCRDLBL.COM and click on the photo to watch the video”

More excitement for the clip from:

[RCRDLBL.com w/ Free Download] – ‘”Kalle” is still a reflection of their own blend of reggae, dancehall and hip-hop, but this one is tougher. If you like your rap with faster drums and almost Kraftwerk-influenced beats, then this one is for you.’

[MTV’s MTV Iggy] – ‘They shot on a roof, in a club, on a playground, in a bodega, down by Canal Street, up to Harlem, and all the way up in the Bronx. Like the heavy, dancehall-influenced track, the video pulsates with the energy of the city — any city.’

[Remezcla] – ‘Sorry, Oakland…but the boys are reppin’ the big apple on this one. But don’t worry, Oaktown t-shirts aplenty.’

[The FADER] – ‘For their new song “Kalle,” the duo un-turfed their sound some but it’s strong in the same way as ever; quick and manish enough to get anybody brawny agitated, but with incantation hooks an Aventura-loving round-the-way girl can warble’

Click on the flyer for tickets to the 2/15 show in New York City: 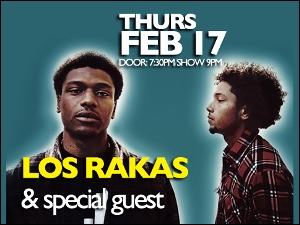